There are five (5) classifications of weapon rarity.

Initially, not much to look at, Crude weapons can range from ornery rusty sabres to old flintlocks, and, being the weakest class of weapon, they can be good starting weapons for many a new Buccaneer earning their sea-legs, and are the only weapons and clothes available to Basic Access Members. They would be naught but worthless training weapons to an experienced Swashbuckler. They can be found nearly anywhere, though.

Next, Common Weapons, much better than Crude Weapons, can be excellent weapons for a Pirate just starting to work up their reputation, and some are very well-crafted. However, the most experienced swashbuckler cannot make good use of these. They're not hard to find, though, and many can be bought at Blacksmith shops. 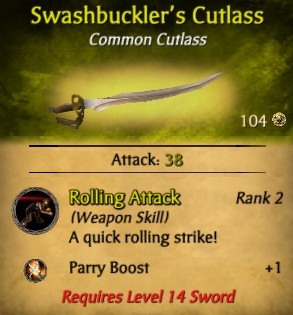 Rare weapons can be put into good use by even an experienced Pirate. Some are extremely powerful, while others, can be, well, not so much (I.E. Deepwater Blade to Tempered Sabre). Some are very difficult to find, while others are more common. Rare items range from embroidered coats and leather boots to ornate broadswords and intricate repeaters. Some clothing and jewelry available in stores can be rare. 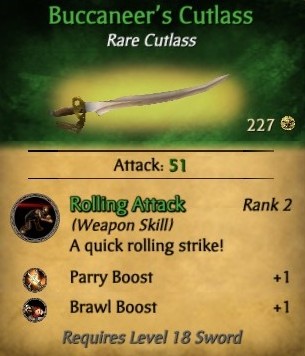 Any Buccaneer who knows how to hold a Cutlass loves these dearly and has an extreme desire for them. Famed weapons are some of the most powerful weapons in El Patron's Weapons Stash, and are extremely hard to find, however there is an abundance of Famed items compared to other Weapon Classes, because every set has at least one (sometimes two and even three) Famed item(s). They are very hard to find. 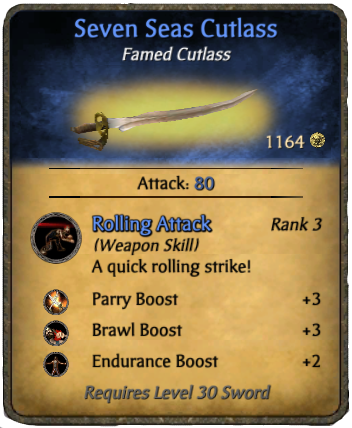 Legendary weapons are the most powerful weapons available to any Pirate currently in Pirates of the Caribbean Online, and are by far the hardest to find. These all-powerful weapons of mass carnage can wreak havoc on your enemies, all with special abilities not found elsewhere (besides the mighty Behemoth Blade) and massive attacks. Any Pirate with even one would be a considerably dangerous opponent, indeed. 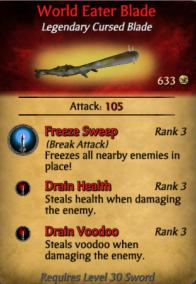 Retrieved from "https://potcolooting.fandom.com/wiki/Weapon_Rarity?oldid=6446"
Community content is available under CC-BY-SA unless otherwise noted.